Unsurprisingly, the pandemic has dominated news outlets, education, and conversations, etc. Not only have the ramifications of COVID-19 prolonged the climate crisis but it has sped up the timeline. Many countries and individuals are taking this opportunity to further their own causes at the expense of the environment. In Brazil, 64% of what remains of the Amazon Rainforest has been destroyed by illegal loggers during the COVID-19 outbreak. The Amazon absorbs 2   “billion tons of CO2 emissions from the atmosphere a year”. However, carbon emissions is not the only problem caused by deforestation.

Many recent viruses were transmitted to people through animals. Ebola was first contracted by a boy who was playing near a bat. When people cut down forests, bats move into barns and people’s homes, where it is more likely that someone will come into contact with them. This same logic can be used to explain the increase in Lyme Disease. Possums and chipmunks originally controlled the tick population, but as the forests were cut down, there were fewer possums and chipmunks, and the tick population increased. Deforestation makes it more likely for a virus such as COVID-19 or Ebola to be transmitted to and between people. Not only are forests – including the Amazon – taking in our carbon emissions, but they are also a natural barrier between wildlife related diseases and us.

In the midst of lockdowns, many business have been shutdown, and ,therefore, many people have become unemployed. Due to this, in the field of science, many research projects have been postponed. Interestingly, due to an 8% decrease in CO2 emissions, scientists have a rare opportunity to test how the earth reacts to this reduction. Ironically, it is also because of COVID-19 that not enough scientists cannot perform these tests.

At the same time, some conservation efforts have been brought to a halt. Biologist, Carlos Ruiz and his team were in the midst of developing a yellow fever vaccination plan for Brazil’s Golden Lion Tamarin (a primate), in the spring. The Tamarin population has been susceptible to yellow fever and, as a result, their numbers have been dropping. The work of Ruiz’s team would be in preparation for the upcoming second yellow fever wave the Tamarins will soon endure.

The high influx of tourism to parks each year helps to maintain a healthy standard of living for exotic species. The lockdowns prevent tourism  that directly funds many environmental projects to help preserve ecosystems and biomes such as rainforests, savannahs, etc. Ecotourism funds most of the maintenance/, upkeep, and payroll for the parks, directly influencing the resources available for use. Shutting down the parks are difficult, but bringing potential COVID-19 cases to wildlife presents its own set of potential hazard. Many animals such as apes are susceptible to the virus, and causing an outbreak among additional species would only create difficulties that scientists such as Carlos Ruiz and his team would have to deal with in the future.

“It’s a little concerning, we only have a couple more months to make it through, so I think we’re all kind of holding our breath and just hoping community spread doesn’t happen.”

Despite these drops in ecotourism, some are experiencing overcrowding in parks. National Parks such as Yellowstone may have not started the season as well as during past years, but by the middle of the summer of 2020 they saw a spike in visitors. With social distancing guidelines echoing in the media, outdoor spaces such as national parks provided an escape for cabin fever. As much as the park employees were relieved to have the necessary income, they were also concerned with potential COVID-19 outbreaks. So far, few park employees have contracted the virus, but there has been an increase in cases in the surrounding areas.

Yellowstone National Park is one example of the drop in tourism that all national parks have felt this year. 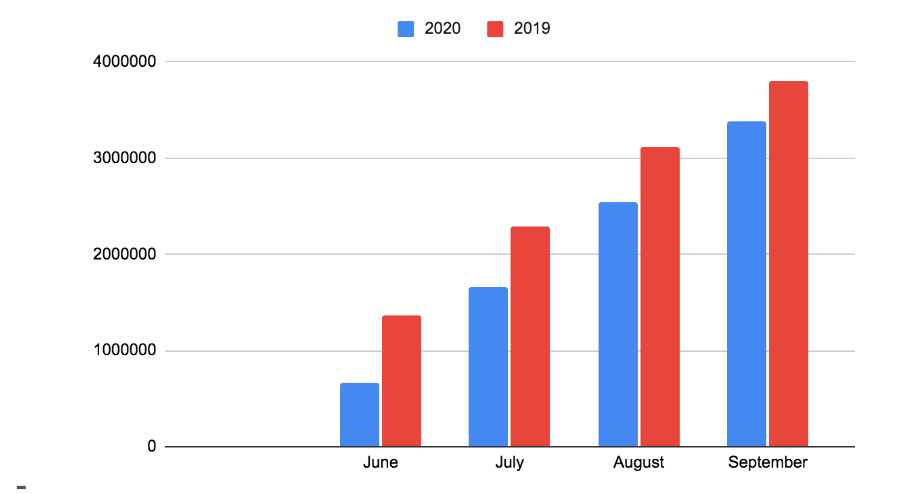 With the decline in ecotourism comes a reduction in patrols, as tourism in national parks is like having a second eye on the movements of the wildlife. However, with the decrease in payroll and less people in the parks, there are more opportunities for poachers to kill animals. Despite the lockdowns, the market for animals that are illegal to hunt is still very high.

In impoverished areas, hunting in conservation areas is becoming more frequent for survival. This can include both using the animal for food, and/or selling them for money. Many of the locals have been poaching these animals for food by using homemade snares and dogs to capture them. In the months of March and April of 2020, the  “Centre for Natural Resource Governance (CNRG), a Zimbabwean resources watchdog”  found 1,150 snares and shot 75 dogs.

“If you have a population worrying about … the most basic of human needs, how can we expect them to worry about conservation?”

While it is easy to condemn the poachers, we must keep in mind the circumstances. There is a large market for illegal animal parts such as rhino horns. People with money and power work behind the scenes in the illegal market and set the prices, which results in control of supply and demand. Those who actually do the poaching are usually poor locals attempting to feed their families. For them, conservation comes second to survival. When poachers are caught, the punishment is not imposed on those who cause the problem, but rather a condemnation of those who are a symptom of the problem. The people in power treat the locals as disposable, aiding them in destroying their own communities. One of the main factors in preventing poaching is convincing the locals to engage in conservation. Tourism brings in a significant amount of money, and, therefore, many conservations try to have the locals engage with their work.

Rhino Poaching in first 6 months of 2020

The  lockdown of countries disrupted the careful planning of poachers. Overall, lockdowns present a challenge for preventing poaching, but the abruptness of it caused a sudden drop in poachers.

“Why COVID-19 will end up harming the environment.”