Protests concerning police brutality and anti-mask campaigns have become globally customary. Governments are faced with the challenge of deciding “whether to enforce restrictions to curb the virus or allow citizens to demonstrate freely”, amidst the pandemic. However, security forces’ actions against peaceful protestors have become brutal, leading to significant violence. Citizens perceived security forces to be “more dangerous than the virus.” “Evidently, the continent’s authoritarian governments are utilizing the pandemic as a justification to stifle the current wave of protests against socio-economic problems and inept government that emerged across Africa almost two decades ago.”Dating back to the emergence of the Arab Spring, countries on continental Africa began to protest their governments and this is a trend that continued through 2019 and into early 2020. COVID-19 has given many governments the excuse to quell peaceful protests in the name of containing the spread of the virus. This third wave of protests, which COVID-19 is being used as a reason to quell, has already brought forth the overthrow of 5 tyrannical regimes in continental Africa.

﻿This has been evident by the fact that, “since the pandemic, African governments have taken a brutal approach to enforce lockdown measures, which undoubtedly have discouraged peaceful gatherings.” The irony of the fact that protests have been forcefully shut down in the name of saving lives from a virus is the fact that a multitude of people have been killed by those governments in the process. “But perhaps, for now, the African population is more concerned with tackling immediate socio-economic issues associated with the pandemic than engaging in protests as evident from massive ques of people awaiting food supplies.” Based of predictions provided in the article, “if the pandemic and related economic issues are not adequately addressed, the Africa continent could experience a surge in political unrest, possibly violent, as the virus’ economic crises further push the population into desperation and despair.” 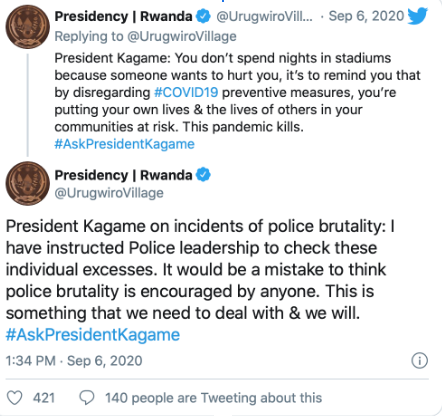